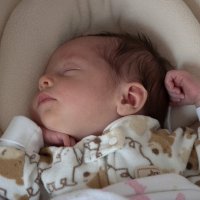 In a nutshell, I’d say fast and furious. Early labour pains started around 4:00 p.m. on Saturday afternoon. I wasn’t sure if it was a bit of false labour or not since early labour started in the middle of the night with Kevin so I likely slept through it with his. We had dinner, got Kevin to bed before I decided that yep, this was it. I called my friend Heather who came over to take care of Kevin should he wake up.

From there things started progressing quickly, and somewhat similar to Kevin, but much, much faster. By 9:30p.m. things jumped in intensity and contraction spacing, we called the midwives, especially since I had been sick a couple times again. They wanted to wait a little longer since contractions were still a little over 6 minutes apart. We paged again at 11:30p.m. and the midwives arrived at 11:50p.m. Celeste was born at 12:31 a.m. Needless to say when the midwife arrived, there was a flurry of activity.

My primary midwife Janessa and her student Ashley were off call that night, so my alternate Michaela (who I had also met several times) caught my baby, with the assistance of Stephanie and student, Beth. As with my previous midwife home birth experience, they were incredible&mdashas was Lee, who I barely let leave my side to go to the bathroom again!

This time around the midwives brought nitrous oxide…aka laughing gas. I like that stuff! I was only allowed to use it during transition contractions, and had to administer it myself. If I had been at our local hospital, I would not have had access to it. During the contraction it probably decreased the pain somewhat, however it was after the contraction, when I took the mask off and it still lingered that it was the most helpful as there was little to no pain. I felt a wee bit high and it allowed a rest before the next contraction instead of a constant pain between.

I guess pushing lasted only about 10 minutes, according to the midwives’ notes. Most of it I did on hands and knees (a position I also found worked well with Kevin). I don’t think my water broke till this point. Lee said her little hand was up around her face and someone said something about her having jazz hands, but right now that’s all I’d like to recall about this part of the labour!

She was definitely less messy than Kevin, who pooped all over the poor midwife immediately after he was born. Her cord was a bit short, which Lee cut after the usual bit of a delay. I had only a very small tear that didn’t even require stitches. Celeste had a good set of lungs which brings us to the most astounding part about the birth…. 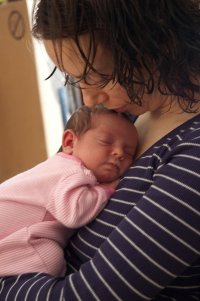 Our son, Kevin, slept through the ENTIRE thing!!! Yes the boy who wakes at least twice a night, slept through the labour (I was not quiet!), people coming and going, and Celeste’s crying. He slept right through till morning (which of course he has not done again since). First thing he wanted to do was show Celeste her various beds where she would sleep (crib, bassinet).

Very shortly after birth, Celeste was rooting and was feeding within the first hour (she continues to breastfeed well). The midwives finished up and were gone around 3 a.m., and I guess we snoozed off and on until almost 7 a.m. (yes Kevin even slept late!) when Kevin got up.

And I don’t know if we are just more relaxed, she is just easy going, or I am just jumping the gun by saying she is a pretty happy easy baby – she will even sleep through Kevin wailing right beside her! Born at 19.5 inches and 7 lbs 8 oz (one oz less than Kevin, though 1 week earlier gestationally). And other than sleep deprivation from feedings every two hours, I am feeling well and physically recovered already.

I feel very lucky to have had such a positive birth experience for a second time. 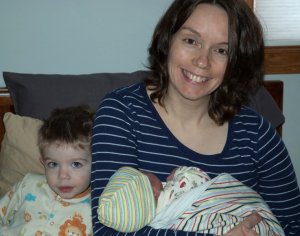