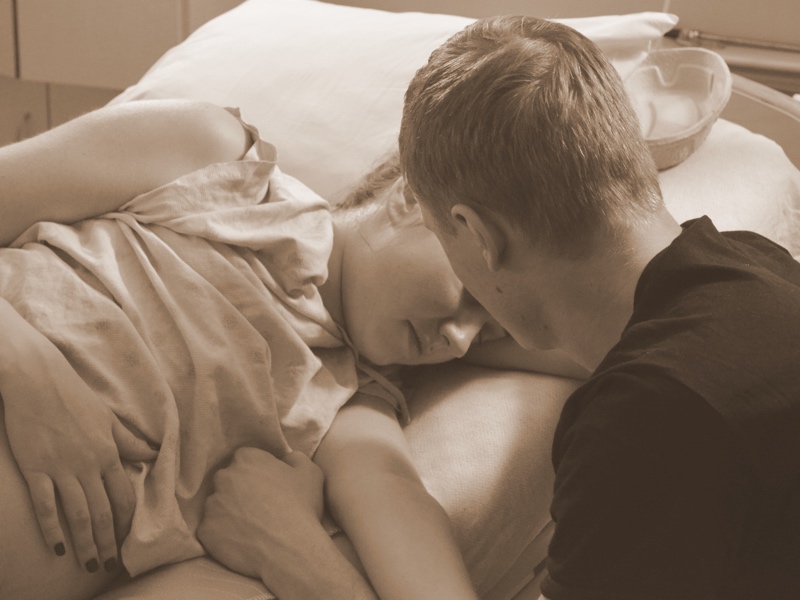 It was Monday January 6th, I was two days overdue, and Aaron was working a day shift. I decided, even in the -20 degree Celcius weather to walk over to my parents’ house. I bundled up and made my way over.  Around 3:30 pm, my contractions began while spending time with my mom. I didn’t think much of it at first as I had been having contractions on and off all weekend. Once I began to take notice of them, I realized that they were different than the ones I had been having. They were more regular, longer, and stronger than they had been all weekend. They went on for about an hour when I decided it would be a good idea to head home and rest. My mom drove me home and said she wanted to stay with me until Aaron got home from work. The contractions continued progressing; they started out about 10 minutes apart and by the time I got home they were every 6 minutes lasting 30-40 seconds.

Since I had been having contractions on and off all weekend, I was convinced I was not in labour and thought that they would go away, so I took some Tylenol and laid on my bed to try and sleep. The pains increased and I was unable to sleep. I could not even lay down during the contractions. Each time I had to get up and lean over the bed. Aaron got home from work and stayed with me during the contractions. In between contractions I kept having to have bowel movements.  I had 5 or more and I felt like my body was emptying itself out. When this started happening, I began to think that I might be in labour, but I still didn’t want to get my hopes up.

By 6 pm the contractions were getting closer together, but still only lasting around 30 seconds. Aaron suggested that I take a bath. This helped me to relax in between contractions because I was feeling quite achy in my lower abdomen and hips. I stayed in the bath for over an hour before deciding to get out. My mom and Aaron had begun setting up the bedroom for a home birth, including the birthing pool. My contractions were 3-4 minutes apart lasting 30 seconds at this stage. We debated for a while and decided to page Nicole at 7:30pm. She called back and decided it would be a good time to come.

Nicole arrived at my house around 8:45pm. I was lying on my bed attempting to breathe through the contractions while trying to relax my body into the bed on each exhale. Nicole helped me by talking me through each contraction. She checked how far along I was. I was 2 cm, fully effaced and stretchy to 4 cm. My membranes had not yet ruptured. At this point temperature outside with the wind chill was -40 and it was snowing with white-out conditions. Nicole discussed with us going to the hospital because of the weather conditions.  Together we decided it would be best to do so.

We made our way to the maternity floor; by the time we arrived it was 10:15 pm. From here on it was a blur. I mostly lay on my side on the hospital bed, Aaron at the side of the bed for most of the contractions. Nicole continually checked the baby’s heart rate and my contractions continued to intensify. Nicole asked if she could check me; I said no. I didn’t think I could handle the pain. I heard a scream and realized that it was me. Aaron, my mom, and Nicole were encouraging me through each contraction, telling me that I could do it, and that I was made for this, even though I didn’t think I could.

Eventually I let her check – I was 10 cm dilated and my membranes had not ruptured. Nicole began moving quickly around the room getting things prepared. I felt like I needed to push. I started pushing. Nicole tells me to push through my bum. The other midwives were there; I didn’t remember them arriving. They said they could see the head. Aaron looked down and saw her head too. It burnt so much. I pushed and I felt her coming out. Her head was out; Nicole said the cord is around her neck twice. She quickly clamped and cut it, and I deliver the rest of her. Nicole held her up and placed her on my chest. She was warm, wet, and purple. I love her; I can’t believe that it was done. The placenta was delivered. She was lying on my chest and I was shaking. I don’t know what to do. They told me I didn’t tear. I was holding the baby, my baby, our baby, baby Charleigh. She is born at 11:40 pm and weighs 6 pounds 11 ounces.