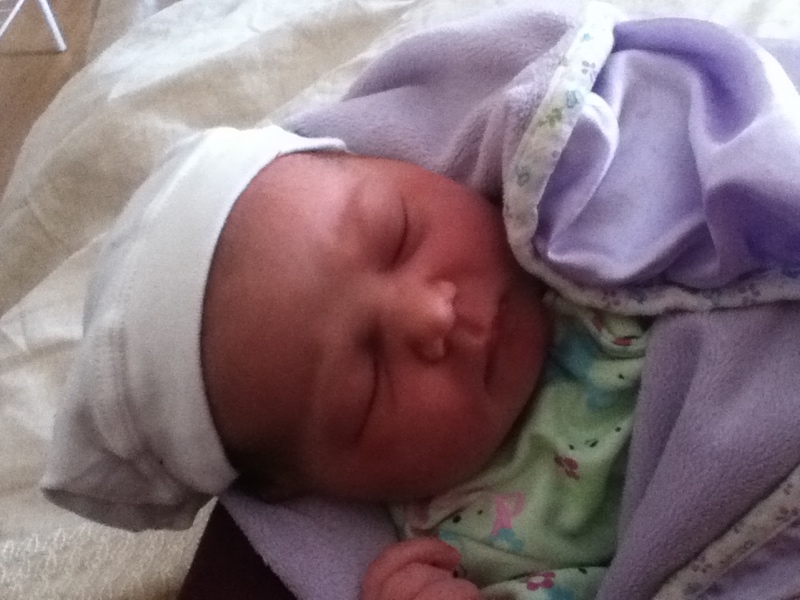 This is the birth story of my third.  With my first, I had a planned natural hospital birth and an unplanned induction.  With my second, I had a planned home birth and an unplanned induction at the hospital.  With my third, I knew I did not want an induction!  I wanted a much different birth experience. Inductions were not my friend. This is why we decided to have her at home.  And this is the story of how she came.

The Thursday before my due date, St. Patrick’s Day, I saw my second midwife, Katie, and she said baby probably wouldn’t be long. I had everything ready a few times over for labour by now since I had a bad backache and nausea for half a week. Thursday night, I was up with contractions every 8-10 minutes thinking it might be that night. But no, morning came and there was my belly, still large.  Saturday, the Eve of St. Patrick’s, I gave up on waiting and went to dinner at my friend and doula’s house. I ignored the stronger contractions that started during dinner. They’d meant nothing so far.

By the time dinner was done and we dropped the older kids off at grandma’s, the contractions were getting harder to ignore, 15 minutes apart and getting strong. But this had happened before, Thursday night to be exact, so I remained a skeptic.

I came home, had a bath, but the contractions got stronger, and a bit closer. By 10:00 pm, I was pretty sure this was it. With TENS machine on back and leaning over birth ball, I asked my husband if we should bother with the birth pool we’d borrowed from the midwives; he laughed and said it was entirely up to me. I said no, we have the Jacuzzi. I called our first midwife, Pooja, with contractions feeling very strong, if still far apart (about 10-12 minutes). She said since they were so far apart, it would be good to rest for the night ahead and to call when contractions were closer. I thought she was crazy that I might be able to sleep between these contractions.   But I went to bed at 11/11:30 anyways and slept so well I immediately took back my doubt.

Just before 12am, the pain was getting so intense, I wanted back in the bath.  The contractions were closer together, but not really close yet, about 8-10 minutes. I decided to wait for five minutes apart before calling Pooja again. So much of the pain faded with the water, especially the hip and back pain, but it just wasn’t deep enough and I hated the Jacuzzi jets. I called out to my husband, “Let’s get the birth pool out, we need the birth pool.” And he scrambled, running outside to find a hose to fill it with, thawing the frozen hose, setting up the tub, putting up make-shift sheets for curtains in our dining room, reading the instructions inside the tub that said “do a test run before labour” (oops!). I kept asking about the birth pool, was it ready yet. No, it was still filling. My husband would give me a visual on the depth by holding up two hands and saying this high.

The contractions reached 6 minutes apart around 12:30.   Soon after it seemed they were five minutes apart, but that hardly lasted at all and it seemed they were 3 minutes apart in no time.  My water broke at 12:50.  My doula had just arrived and we had paged the midwives. We talked to Pooja just after 1 am.  She left from her house right away and set off for ours, but we were a bit of a drive away, so she was going to be a little while.

Meanwhile, when my husband had given me the last visual on the birth pool, I said that’s enough … let’s move to the birth pool … wait, after this contraction. By this time, I was chilled and shivering but still feeling like I could deal with these difficult contractions with the wonderful support I had and being in my quiet familiar home. I just didn’t know for how much longer. Little did I know, I wouldn’t need to for much longer. This was transition and I was almost done.

I climbed into the birth pool at 1:15am and the contractions were strong, I was cold and our water heater had given up its entire contents of hot water to the birth pool. The water was a reasonable temp, but only cold water was filling the pool now. And I was just shivering.  My husband and doula were putting pots and pots of water on the stove and heating a bowl of it in the microwave, then pouring it by me in the pool. Those little things felt like heaven.  My husband and doula were both pushing on my back during contractions too.

Around 1:25, my doula, who had been timing my contractions, asked if I felt the pressure to push. I said no, thankful I didn’t only because Pooja was not there yet. The very next contraction I felt it. I was worried then, but still focusing. I looked to my doula to see if she was worried. I could tell she was concerned and not worried. I asked if I should push. She said no, that on the next contraction, to pant through the urge to push. Pooja was almost due to arrive, but we decided to call EMS just in case.

My husband called EMS and I panted through one contraction. The next contraction, I tried panting again but could not keep from pushing. I felt the most intense feeling as I pushed and my doula felt the head of our baby, but it wasn’t out. I have no idea what order everything happened in next. The next contraction, the head was out and Pooja was in the driveway, my husband was running out to tell her baby was here. As he helped her carry bags in, he saw the body of our daughter being born in the water, on her due date, St. Patrick’s Day, and in the caul! The best part was that I got to reach down and pick my new baby girl up out of the water.   She cried and was beautiful and healthy.  The pain relief was instant and so complete once she was born.  It was as if labour and delivery was a distant, foggy dream and I felt tired, cold but unbelievably better and happy, very happy.  And for all that time that I had focussed and worked during labour and delivery, I rested then, after delivery, and didn’t have to do a thing.

Now everyone around me went into a flurry of work.  Pooja got me out of the pool and looked after me.  Shortly after, a second midwife, Lana arrived and checked Carley over thoroughly and my doula who had done so much already, stayed by my side or cleaned or got me a warm robe (heaven again!).  I was moved to my bed, which never in my life felt so comfortable.  While everyone else charted and helped me, I got to talk to my husband, snuggle and feed my beautiful new daughter.  It was a wonderful experience.  And it definitely beat an induction any day!

I’m so grateful for the care my midwives gave me and would highly recommend them.  Every midwife I met at St. Jacobs was so helpful and took the time to explain what was happening to me and to more importantly, listen to what I felt and wanted.  I really felt Pooja gave me so many suggestions for dealing with all the things that might come up in birth and how to achieve the natural birth I’d always wanted.  I’m also unbelievably thankful I had a doula with me.  I think my best birth decisions were to have midwives and a doula.  I also LOVED having the baby at home.  I was so much more comfortable and the pain was much more manageable there than in the hospital with my first two births (and this one was more painful than with my second child!) not to mention that she might have been born in the car if I tried driving to the hospital!  And then there was the birth pool — the birth pool I was so sure I wouldn’t need but was worth every bit of stress it took to set it up last minute, even if I was only in it for a while.  I now know why water is called the midwives’ epidural.

Oh, and the EMS arrived after Pooja had checked everyone over so she told them we were okay and didn’t need them.  I found out later that we would have had a trip to the hospital if the EMS had looked after me.  I’m so thankful that they were available and so quick to get there, but also thankful we didn’t need them after all since we had a healthy baby and could just stay where we were! 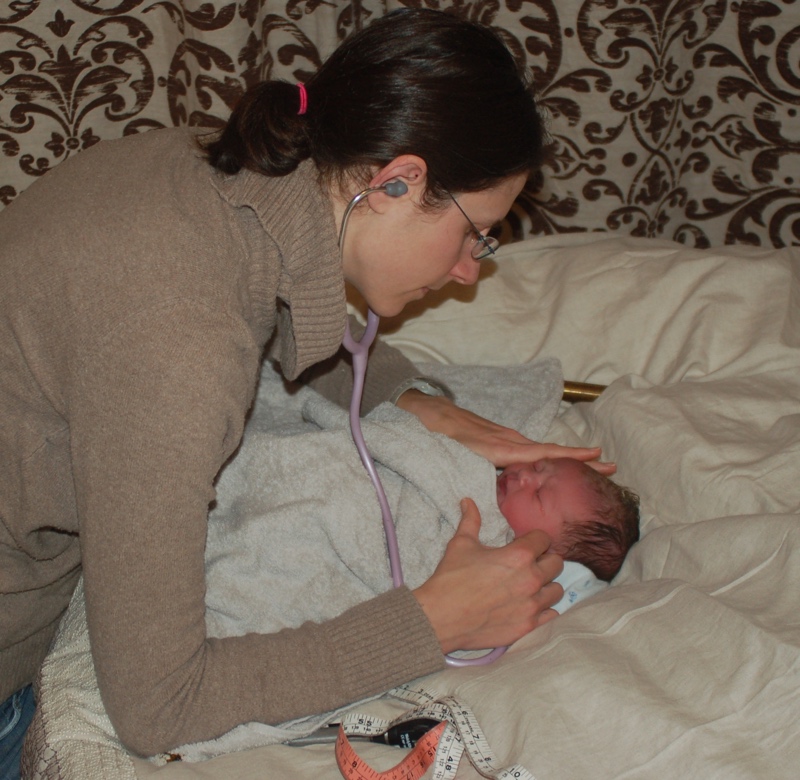