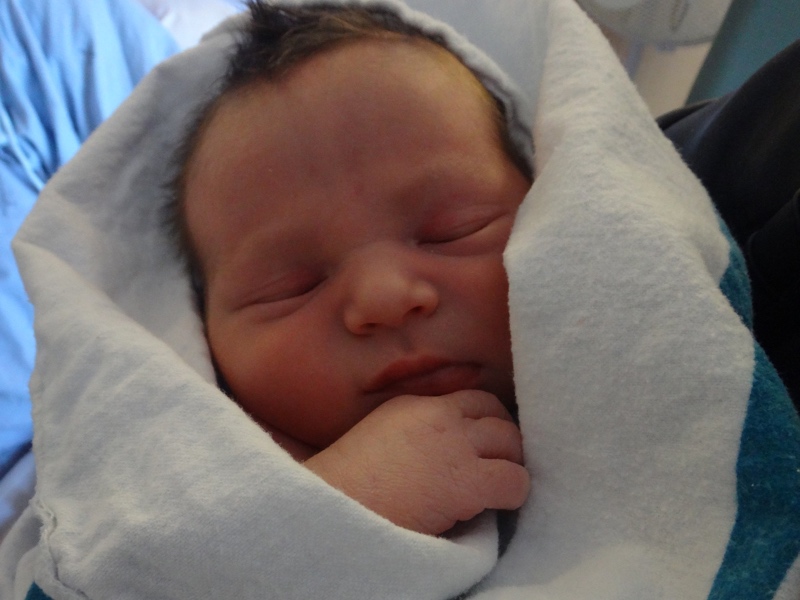 I had a wonderful pregnancy with Jacob (my first) – I felt healthy and comfortable the entire time and loved being pregnant.  I read a lot about pregnancy and the development of a fetus, all the while marveling at what an amazing process it truly is.

I had always been interested in homebirth as an option, but lacked a lot of information, which caused us to initially steer away from the idea.  My midwife, Stephanie, suggested that we attend the homebirth class that is offered regularly at the clinic so that we could (at the very least) become informed about what the midwives would bring to our house even if we simply wanted to labour at home for as long as possible before transferring to the hospital.  So, we attended the homebirth class and began to investigate other information about homebirths (I’ve included some of the resources I consulted below).  Everything we read and heard very much resonated with both Dave and I, and we quickly became quite comfortable with the concept of having our baby at home.

I soaked up everything I could about pregnancy, as I found learning about it all – what goes on in mom’s body as baby develops, and just how that baby develops quite fascinating.  I became quite excited about the opportunity to have a baby at home and had all of the items needed prepared well in advance.  During our prenatal classes, our instructor suggested that instead of having a fully detailed birth plan, a good alternative was to highlight 4 or 5 aspects of birth that were most important to you.  After all, there is so much about labour and birth that is uncontrollable, so perhaps it’s better to go in with that short list and the appreciation that whatever happens is all for the best of baby arriving safely and both mom and baby remaining healthy.  My key birth plan items were a) the freedom to move throughout labour, (which was a key impetus) to b) no pain meds or epidural, c) baby to be placed immediately on me after arriving and d) that the cord not be clamped or cut until it stopped pulsing.

I tested positive for GBS (group B Strep), at 36 weeks and proceeded to do a few things to see if I could get rid of it (grapefruit seed oil, immune tea, pure cranberry fruit juice and extra probiotics).  My midwife allowed me to retest a couple weeks later, but unfortunately it wasn’t enough time to see any change in the results.  Since I was GBS positive, I’d have to have antibiotics administered every four hours during active labour (this would protect the baby as he or she passed through the birth canal).  If my water happened to break before labour commenced, I’d need to be induced at the hospital (as a precaution, to limit exposure to the baby).  I was told there was a 7% chance of my water breaking before labour naturally began.  I was disappointed by this news, but figured the chances of my water breaking ahead of time were slim, and unless that happened, I’d be able to continue with our plan to have the baby at home (as the midwives would be able to administer the antibiotics at home).

As our due date neared, Dave and were getting so excited to meet our baby, and I felt great right up to the very end.  Monday, October 7th – due date!  I took our black lab on a brisk 5k walk in the morning and told baby he or she was welcome to come anytime!  Early in the afternoon, my water broke.  Seriously? 7% chance of the waters breaking before labour commenced.  I called my secondary midwife (Lana), as Stephanie wasn’t on call.  Lana came over and administered a first dose of penicillin (by IV) at home (around 2pm), which essentially gave me four hours to see if labour would commence.  I was quite disappointed as I really didn’t want to have our baby in the hospital.  So I spent the following few hours walking and trying to remain relaxed to allow labour to commence.  If contractions began, we could remain at home and continue with our plan to have a homebirth.  If labour didn’t pick up, we’d have to head to the hospital for an induction.

At 6pm, we met Lana at the hospital, where I received a second dose of penicillin (which would continue every 4 hours until birth); was admitted and started on synthetic oxytocin at about 8pm.  Lana then headed home for a break, leaving instructions to call whenever we needed her.  From there on, I walked and walked and walked and continued moving constantly.  A few friends and family members stopped by for a visit in the evening as well.  Since I wasn’t dilated at all when the induction began, 8pm to 3am was essentially my body accepting the synthetic oxytocin and beginning to ripen my cervix.  Around 3am I started to really feel the contractions and shortly thereafter was at the point where I had to pause, focus and breathe through each one (I could no longer walk & talk through them).

Around 3am, I was experiencing consistent contractions every two minutes lasting about 45 seconds on average.  Dave was a great support.  He’d rub my back and get me water in between contractions – I drank so much water that evening.  He kept family posted on our progress (until they went to sleep) and was very supportive.  I really hated lying down (as it made every feeling far more intense) and really only did so when the nurse had to check me; otherwise I was up walking around, leaning on the bed, sitting on the physio ball or sometimes on all fours over the ball.  Leaning on the bed was best for me, and it kept the baby’s heart rate monitor and the contraction monitor in place so they could see the readings from those. By 5am, I was 3.5cm.  At 7am I was 5cm and the nurse said it was usually about an hour per centimeter from there, plus pushing time.  By then, I’d been awake for 24 hours and I was getting quite tired and starting to feel it.  I was still very resistant on having an epidural, but I was getting tired, so we briefly discussed it.  I then asked if I could use the bath tub (Grand River has in-suite jet tubs) as it was more or less the last tool I had in my arsenal.  Dave also gave Lana a call around 7am and she was back at the hospital within half an hour.  Lana also called Stephanie, my primary midwife, as she was back on call at 8am that day, so she came in and Lana left (later telling me that she would have stayed if she’d known how quickly I’d deliver!).

I laboured in the tub for what I recall was about three contractions, but I couldn’t take it – it just wasn’t where I needed to be at that moment.  When I got back out the nurse needed to check my progress again and I could not have been more delighted to hear that I was at 9cm!  Transition zone! Dave said to me “I believe this is when I’m supposed to tell you that transition is the shortest part of labour!”

Transition for me was very intense because my body had taken over for the production of oxytocin, but the synthetic drip I was on to induce labour took a while to be turned down.  I recall only very, very brief breaks between contractions during that transition period.  It wasn’t long before I felt the urge to push and upon further check was fully dilated.  The OB came in to deliver and suddenly the room filled with many people.  I was somewhat oblivious to it all, however.  I found the pushing part of labour to be quite a relief from transition.  I had an outlet for the pressure I was feeling (I don’t recall pain, just pressure) and was motivated to meet my babe!  In addition, the baby’s heart rate dipped a bit at the end of each contraction while I was pushing, so I really had to focus on pushing with everything I had during contractions and relaxing and breathing in between them.  Stephanie (my midwife) was instrumental – I tended to focus on what she was encouraging me to do while Dave was there for support and encouragement as well.

I pushed for 20 minutes or so, and there he was!  9:15am weighing 7lbs 8oz and 19.5inches long.  Dad cut the cord and Jacob was taken across the room for a quick check with the paediatrician because his heart rate had dropped a bit during the contractions, but he was back with me in just a couple minutes, scoring 9 on his APGAR and screaming to ensure we knew of his arrival.

Meanwhile, the OB gave me a few stitches for a small episiotomy and worked to deliver the placenta.  I hemorrhaged a bit, which they were able to get under control while I held Jacob.  Jake took to breastfeeding immediately and we’ve had great success ever since.  We stayed in the hospital for 24 hours following as they just wanted to keep an eye on me as a result of the hemorrhaging, but I was fine and we were released mid-day on the 9th of October to head home.

All in all, Jacob’s birth was a wonderful experience, even though we ended up in the hospital instead of at home, and even though I had to have an induction.  I believe I held on to my desire to avoid an epidural with even more commitment because of the other changes to my preferred birth plan.  But in the end, when baby arrives safely, it doesn’t really matter exactly how baby arrived.  I’m completely content with my pregnancy and the experience of Jacob’s birth.  I absolutely loved being in the care of the midwives.  The entire process was a wonderful experience – getting to know Stephanie and Lana, regular and informative checkups and visits, having the support to learn and ask questions and to become confident in my ability as a woman to deliver a baby naturally.  All of this resulted in me having literally no anxiety or worry about the work or pain of labour and delivery.  I embraced it – after all, most humans arrive by natural delivery and all of our mammal friends do as well.  (To be honest, a bit of stubbornness played into it as well…if others can do it, so could I!) 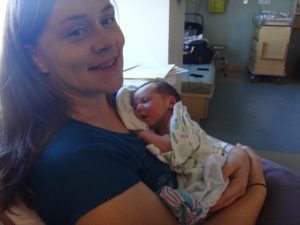 The staff at Grand River was wonderful as well.  The facility there is also great, decent benches for dad to sleep on and large clean rooms.  As someone who prepared for and looked forward to delivery in the comfort of home, I honestly and truly had a great experience, even though we ended up at the hospital.

My advice to all moms—soak up as much information as you can.  Empower yourself by becoming knowledgeable.  Create a flexible plan for yourself and maintain that flexibility – as you won’t know how you will handle labour and delivery until you are in the midst of it.  It is okay to make changes and decisions in the moment.  Be patient with yourself.  Be patient with your supporters and caregivers.  Remember that each of them comes with their own unique set of experiences and opinions.  Listen, and then go forward with whatever resonates best for you.  All the best for your own pregnancy and birth experiences!

(there are several copies of both available to borrow from the St. Jacobs Midwives’ Clinic library)